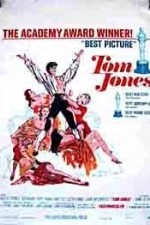 Tom Jones, abandoned as a baby in mysterious circumstances, is brought up by Squire Allworthy. Resented by Allworthy's legitimate heir Blifil, Tom grows into an amiable rascal, fond of the fair sex. He loves Squire Western's daughter Sophie, but when discovered by his tutors with a local girl Molly, he is banished by his benefactor. After numerous adventures he reaches London and embarks on an affair with the wealthy Lady Bellaston while Squire Western's sister has arranged a marriage between Sophie and Blifil. Horrified, Sophie escapes to London, meeting up with her cousin Mrs. Fitspatrick who is also running away from her husband. Mr. Fitzpatrick follows them and suspects Tom of having seduced his runaway wife.