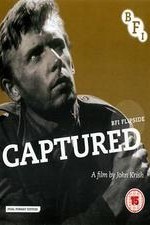 Captured was commissioned by the Army Kinema Corporation as a military training film and previously only shown to military officials. It demonstrates how British POWs responded to brainwashing and torture techniques during the Korean war.